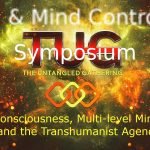 This Discussion will be broadcast on CCN, LIVE Stream, beginning at 10pm London/ 5pm EDT

In a world that is led by media manipulation, political propaganda, religious rhetoric, and Hollywood hype, people are waking up to the ideology that they are being manipulated and controlled. But what if what we are witnessing isn’t just spin doctoring and cleaver cliche agendas? What if the truth is far deeper and far more oppressive than we ever imagined?

In a world where we are lied to daily about history, politics, economics and the very fabric of our planet, the greater question we need to ask is just how deep this rabbit hole goes.

Hollywood has indoctrinated us with images and stories of “AI”, and uncountable books and shows have told “fictional” tales of “Mind Control” and Mass Hypnosis, all programming the unsuspecting public with pre-set definitions and explanations of these words. But what if the truth behind these implanted words is much more convoluted and disturbing, entangled in a far deeper agenda than we ever suspected?

At The Untangled Gathering on Sunday August 9th 2015, Lisa Harrison and dani arnold mckenny will be joined by an extensive panel of researchers to discuss:

The 3 hour TUG Symposium will dig into several viewpoints, perceptions and theories of what we are witnessing now on a massive scale, globally. From the scientific & physical, to the energetic & astral or quantum levels. We will be discussing the agendas as we see them, and how they are being rolled out across our planet, both behind our backs and directly in front of us, in full view…. if you realize what you are actually seeing.

Please join us on Sunday Aug 9th at 10pm BDT- you will be able to watch the live stream of the TUG Event on CCN:

If you wish to take part in the conversation, you can join the chat room on Lisa’s website. We will be taking questions towards the end of the symposium from the chat room.

You can also watch the TUG Event live here on RTS or on Facebook on the CCN or RTS pages. For more information, Please visit TUG EVENTS HERE: http://tug.events/

Lily Earthling Kolosova: Internal Researcher into our Organic Earth and Organic Sun, the current Matrix System and the return to the Original Earth Timeline.

Claudia A: Lady in a cloak, long time voyager on the cosmic sea. Co-founder of Earth Empaths. Lover of music of the spheres.